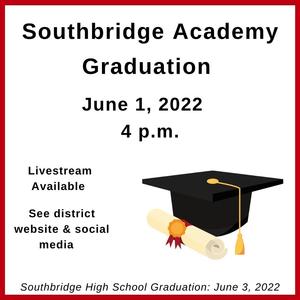 Congratulations to the Southbridge Academy class of 2022!

For a recording of the live stream of the graduation, see below or find the link on our website and social media.

For information about the Southbridge High School class of 2022 graduation, click here.

Southbridge Academy isn’t like most high schools; its size and structure provide a unique, tailored experience for its students. And for several of these seniors, SA was just opening its doors when they arrived. Liam King remarked,  “The school has definitely become a cohesive place where it’s easy to learn.” King has enrolled at Quinsigamond Community College for the fall, where he plans to study computer technology. The theme of community and development was widely shared by all students and a big part of what made Southbridge Academy a place where they feel they belong.

For a small school, the team at Southbridge Academy has worked hard to provide students with diverse opportunities. Philip Mulrain commented on his appreciation for the opportunities he had at Southbridge Academy to pursue the arts. As the school expanded, so did its offerings. Philip said that some of his favorite classes were music and art. After graduation, he’s planning to work doing soil testing and enjoying his time working outside but he knows that he’ll always appreciate a creative outlet.

While programs play an important role in any scholastic experience, speaking with the seniors and their families, the discussion turns to teachers. The teachers, counselors, staff, and administrators at Southbridge Academy all work together to understand the needs of the students and their families. It’s no wonder that parents and guardians aren’t short of words to describe the manner in which the Southbridge Academy team has aided in the educational journeys of their children.

Austin Wright’s mother, Sarah, remarked, “I’m a proud Southbridge Academy parent!” Austin is set to graduate and his mother appreciates the committed staff at SA. “The teachers never gave up on him, and that’s what really matters. They’re a committed support system for all of them (students),” Sarah says.

Austin doesn’t know what’s next for him just yet, but he hopes it will involve his singing talent. In the meantime, as he reflected on his time at the Academy he says that the teachers do what they do “because they care.”

The Wright family isn’t the only one who has built a connection with the team at Southbridge Academy. Vicki Peck appreciates that she’s always felt welcome when it came to discussing her student, Liam King. She remarked that “I could always call or text; they really want to be there for the families. For me, they’ve been a huge lifeline.” For his part, Liam also thanked his teachers, saying, “Everyone here cares, and they’ve gone above and beyond for all of us.”

The appreciation for teachers runs deep amongst this group of seniors. Haily Coburn shared that there was a teacher who started with her at SA that always pushed her to do her best. Haily, who is pursuing her CDL after graduating, said, “He’s always been there for me.”

Selena Guerra, an aspiring nurse, and another one of the first SA students credited all of the Southbridge Academy teachers for guiding her path to graduation. “They’ve helped us build our confidence,” she said. “They definitely help us through the tough times.”

Joniel Sanchez-Ferrer was equally complimentary. He credits his teachers for helping him to understand that the work is important. “We had staff that pushed me,” he said about the teachers he’s met along his path. Joniel's plan for after graduation is “getting straight to grinding” in the workforce. The gratitude these students have for the team at Southbridge Academy is only equaled by the pride that the team has in them. For them, this graduation ceremony will be special.

As the team at Southbridge Academy says goodbye to these seven seniors, they do so knowing that they’re losing part of a family that’s developed since Haily, Selena, and Joniel first stepped foot in the building six years ago. Staff has come and gone but the mission has remained the same; to support the students and families of Southbridge Academy. A mission that will continue into the years to come.