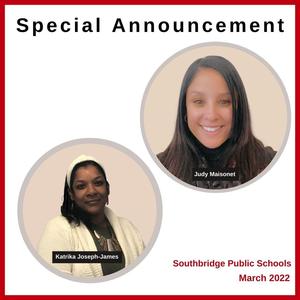 Southbridge Public Schools is proud to share that Judy Maisonet, principal at Charlton Street Elementary School, has been selected to fill the position of Chief of Staff for the district. Judy will replace Maureen Gullekson, who is retiring after seven years with Southbridge Public Schools. Charlton Street School Assistant Principal Katrika Joseph-James will be promoted to principal.
Judy has been the principal at Charlton Street Elementary School for five years, and has led its continuous growth. She has created a positive culture and climate for her students and staff, where everyone is considered a part of the “Charlton Street Family.”
“I am looking forward to continuing to support the district in this new role,” Maisonet says. “I will miss my students and staff at Charlton Street School, but I am not going far away. In my new role, I can continue the work of helping the district move forward in a positive way that supports students, families, and staff.”
“I am looking forward to having a school leader with significant knowledge of the district join the team at Central Office to help implement sustained improvement and planning for the day when receivership is no longer needed,” says Dr. Jeffrey Villar, district receiver.
Katrika Joseph-James has over 17 years of experience in education, having previously worked in Springfield Public Schools in elementary and middle schools with considerable background in Special Education. She started working at Charlton Street School in June 2021 as she was finishing graduate studies and obtaining her principal’s license.
“I am excited to continue the growth that has been established at Charlton Street School,” says Katrika Joseph-James. “Great leaders help others to become leaders, and I have had the benefit of learning from Judy’s leadership during my time here.”
Judy will be transitioning into her new role over the next few weeks and providing support as Katrika settles into her new role as principal.
--------
Estamos comprometidos a proporcionar todos los materiales en inglés y en español. Si todavía no se ha traducido algún material, vuelva a consultar más tarde.
We are committed to providing all material in English and in Spanish. If material is not translated yet, please check back later.